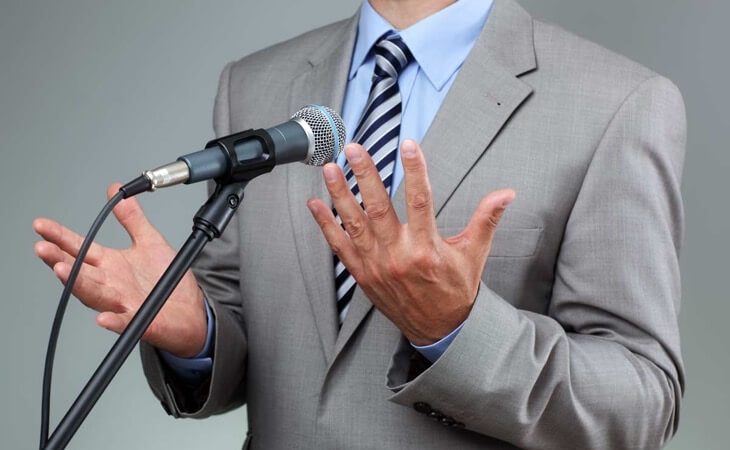 When you are making a public presentation in which you hope to pass on knowledge to your audience, it turns out that your body’s gestures speak as loudly as your words.

For a basic example of this, have you ever tried to explain to a person how to tie their shoes without using hand gestures? Or discussed how to ride a bicycle without any body gestures?

Most of us can’t manage to do that.

In fact, regardless of what kind of information we are trying to pass on to our audience, we naturally speak with our bodies as well as our words.

Their research, entitled “Embodied Communication: Speakers’ gestures affect listeners’ action,” demonstrated that our hand gestures are a reliable source of perceptual-motor information during human communication. All participants, without exception, were sensitive to the information they were interpreting from the speaker’s body as well as their words.

Even more amazingly, in some cases the speaker was actually able to transmit information using body gestures that could not be expressed by the words in their speech.

Audiences judge you from your non-verbal behaviors

Not only do audiences receive your non-verbal messages of information, but they also judge you by your body language as much as by the words you say.

According to Harvard Business School professor and researcher Amy Cuddy, if you can change your body’s messages, you can change how people perceive you.

Cuddy’s research, much of which she reveals in her TED talk, is particularly interesting given her personal history. She is a woman that few people ever considered could become a successful scientist. Nobody even thought she would graduate.

That is because early in her college career, she sustained a severe head injury in a car accident. The doctors treating her advised her it would be a monumental struggle if she could ever regain her full mental capacity, let alone continue her education.

She proved everyone wrong and not only graduated, but became a professor. Along the way her interest in researching how people respond to nonverbal behavior grew. She saw that the way our bodies spoke impacted people and prompted snap judgments far quicker than the words we spoke.

She coined the term “power posing” to describe how a person’s body influences others as well as their own brain.

How a former U.S. president confused his audience

One of the best examples of what happens when your body sends a different message from your words occurred when former US President George Bush Sr. used these words in a speech:

“The left hand now knows what the right hand is doing.”

His audience was confused. The moment was caught in video and was replayed over and over as part of former television late night host David Letterman’s Top 10 George W. Bush Moments. You can still see it here:

This incongruence between speech and body language was further studied by researchers Spencer D. Kelley and his colleagues in a 2010 study2. The research paper that resulted, “Two sides of the same coin: Speech and Gesture Mutually Interact to Enhance Comprehension,” confirmed that when gesture and speech convey the same information, they are easier to understand.

People comprehend faster and there are fewer errors in interpretation than when they convey different information, the researchers concluded.

Knowing that how your body gestures and moves during your presentation impacts the kind of information and impressions your audience are receiving, what can you do to create a favorable response from your listeners?

Start by synching your body and your mind. If you care passionately about the subject you are speaking about, and you believe every word of what you are telling your audience, your body and mind will naturally fall into sync and your audience will interpret your sincerity and audience. They will respond warmly.

It is important to remember that your physical gestures are an outgrowth of what your body hears you saying and how you feel about it. If you believe it, your audience will believe it more easily. If you are in conflict with the words you are speaking, it will be difficult for your body to hide its distaste.

Because people instinctively understand body language, they will trust it before they digest your spoken words.

If you want your audience to feel good, smile at them consistently. People respond to smiles with a sense of feeling good. They are more include to listen to you if you smile because they see you as trustworthy and cooperative. You are on their side. This is a genuine smile, one that wrinkles the face, lights up the eyes, and moves across your face naturally and easily, not an insincere grin.

The amazing thing about smiles is that when they are authentic and people see them, they almost always smile back in return, and this creates a wonderful mood in which to continue your presentation. With your audience in a positive frame of mind, they are more likely to stay engaged with you and think favorably about your remarks when you are finished.

Use your hands for the biggest impact

The embodied speaker becomes a master at using his or her hands to emphasize vital parts of their presentation, and the audience recognizes this and responds favorable to it.

Experiment before a mirror by using your hands to illustrate and underline what you want to say. It will help you deliver you key message more succinctly and help your audience understand it more clearly.

Synching your body and your speech at its most basic level also includes ensuring that you control your voice, your primary method of delivery. If you want your audience to believe what you are saying, keep your voice well-modulated, not shrill or weak.

Women need to be particularly careful that they do not let their voice rise as sentences end because the audience interprets that as weakness, or as seeking approval.

Finally, even if you are nervous, never stand before your audience with your arms or legs crossed. It indicates that you are not being transparent with them, and they will sense a barrier between you and them. This does nothing to enhance how receptive they will be to your remarks.