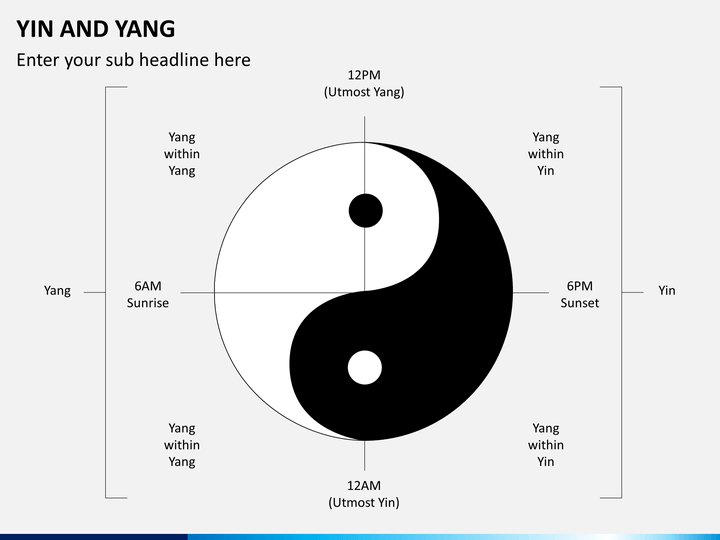 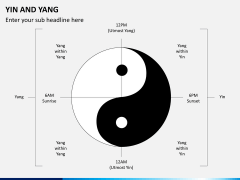 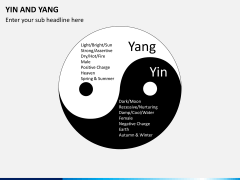 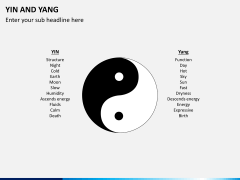 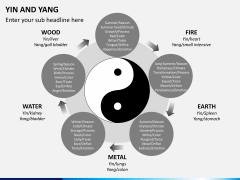 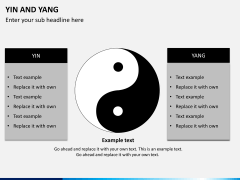 Our Yin and Yang PowerPoint Template offers an ultimate way to make your presentation lively. The set with its 5 fully editable PPT slides helps you evolve your ideas in as gripping a manner as possible. The set is a beautiful combination of designing aesthetics and contemporary styling. It gives you an elegant way to showcase your presentation on Yin and Yang or about Taoism and related beliefs. The set follows minimalistic designing making it clutter free and easier for you to include other designing elements or text.

As the name suggests, the set is basically meant for explaining the philosophy of Yin and Yang or its usage in any other concept. But, since the set is versatile, you can use it for various different purposes that can be connected to the basic concept. As a part of Chinese Philosophy, this concept is used for explaining opposite or contrary forces and the way in which they are complementary or connected to each other. Thus, the template proves best visual solution for showing interdependence or correlation between different elements, ideas, thoughts, and views. Also, in the similar manner, one can use it for explaining how two departments of the same company are interdependent, or how two different sectors of market are joined to each other by certain subtle means, and so on. Again, it proves a great way to demonstrate the pros and cons of some idea or to simply focus on two different sides of a particular issue.

Yin and Yang is a popular concept in Chinese philosophy and religion. According to this concept there two kinds of forces, one of which is Yin representing dark, feminine, as well as negative side. And another one is Yang which represents bright, positive, or masculine. The philosophy believes that there is a constant interaction between these two types of forces and this constant interaction maintains the harmony of the universe as this interaction has its influence on everything that is a part of the universe. In other words it is a duality theory in which dual facades or forces are joined together to form a whole.