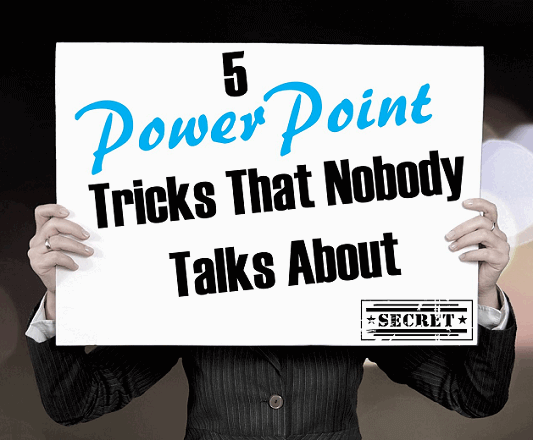 PowerPoint has been around for more than two decades, so long that nobody in the millennial generation can even imagine listening to a lecture or giving their own presentation without it.

Despite its longevity, the way most people use it is surprisingly unchanged. Slides have either dark backgrounds with white type or light backgrounds with black type. They are boring boxes, mostly bearing words preceded with bullet points or pie charts or graphs.

In good PowerPoint Presentations, the slides may capture the key points of the speaker and help us commit them to memory. In bad PowerPoints the slides are a monotonous run of words identical to what the speaker is saying. Either way, the software is a standard crutch for the speaker and in the worst case, a non-medicinal cure for insomnia.

But a small number of professional presenters have figured out ways that PowerPoint can be daring and different and delightful. Their rarely aired secrets are the stuff that will make your next presentation wow your audience.

If you want to amaze those watching your next PowerPoint presentation, here are 5 of the best-kept secrets that nobody talks about.

#1. Change the way you think about PowerPoint and it will change with you.

Looking at anything in a new way is a proven method to spur creativity and the PowerPoint tool is no different. Most people still think about the original intent of PowerPoint’s inventors, Bob Gaskins and Dennis Austin, a University of California-Berkley doctoral student in 1984. Their startup business was acquired by Microsoft in 1987 and the software came out with Windows 3.0 in 1990.

The program was originally called Presenter, although that was changed for copyright reasons, but it is a clue to their intent. The program was designed to support the presenter.

But professional presenters have moved beyond the idea of PowerPoint in a supporting role to understand for true effectiveness, it has to be co-presenter, a star in its own right.

Instead of a mere echo of their key points or a place to park their pie charts and graphs, really clever presenters speak to their audience, and then become silent so the PowerPoint can speak for them as well.

As an example, look at Doug Kessler’s remarkable PowerPoint “The Search for Meaning in B2B Marketing” here:

Kessler, co-founder of Velocity Partners, uses his PowerPoint to augment his presentation in a way that allows it to stand eloquently and profoundly alone. Instead of the standard box design, he uses the slides like the pages on a notebook, revealing his thoughts in bold type or handwritten notes or brightly colored written words for emphasis.

The content is riveting, but even more unusual, it is warm and inviting to the viewer. When was the last time you saw a PowerPoint that connected with you emotionally? This one does in a sincere and confiding tone that draws you into the story and keeps you hooked right to the end.

Note that it has no pie charts, no graphs, no bullet points and no clip art. Bold in its simplicity, it is a different way of looking at PowerPoint and much more effective. By changing the way he thought about PowerPoint and seeing it as a tool to communicate in its own right as opposed to a mere add-on to a presentation, Kessler gave it new life.

#2. Never include anything superfluous in your PowerPoint

A well-designed room is an uncluttered space. Each piece of furniture, each accent piece serves a specific purpose or it is discarded. The greatest works of many artists are stark in terms of backgrounds and detail, making their visual impact magnified. Great writers like Ernest Hemingway used his words sparingly, going over manuscripts and deleting all but the words that emphasized his point.

A striking PowerPoint, like all art, should also discard all words and illustrations that are superfluous.

To see how simple images and few words can have a powerful impact, view the PowerPoint “Smoke: The convenient truth.”

Note the sparse use of words, with each one carrying its weight to tell the powerful story. Note the dark background to reflect the subject and the simple illustrations that pull it all together. Sparse, simple and powerful, nothing clutters its impact in the minds of those viewing it.

#3. If your PowerPoint is a summary of your presentation, change it.

How many times have you heard people ask for PowerPoint Presentation to be emailed to them after a presentation so that they have access to all your key messages and statistics? Sometimes the person even sends an email apologizing for missing your presentation and asking for the email so that they can be in the loop on what you were saying.

If your key message and every relevant statistic is in your PowerPoint, ask yourself why you bothered to stand there and talk in the first place? Instead of emailing your PowerPoint, you should be emailing a text copy of your remarks, or even an executive summary. Statistics without explanations weaken your message and points without the passion and persuasion of your arguments are wasted.

A secret to building effective PowerPoint Presentation is that you write your speech first and then do a written summary that can be emailed to any audience member who wants to remember the key points and statistics.

Then do your Power Point. The act of doing your summary first will ease the restrictions your subconscious mind puts on yourself to include all key information points in your PowerPoint slides. It allows you to be more creative with your slides.

As an example of how this is done, check out “20 Tweetable Quotes to Inspire Marketing and Design Creative Genius”:

So many presentations use quotations, but none as beautifully designed and consistently impactful as this. Instead of using the occasional quotation on a PowerPoint slide throughout your presentation, what about talking how sometimes the best messages already exist and you just have to package them in a way that people can absorb one inspiration at a time. Then end your presentation with a PowerPoint like this.

Of course people will ask for it too. So email it to them WITH your presentation summary, never alone.

#4. Be conscious of the high rates of poor vision in your audience

According to the World Health Organization there are about 285 million people worldwide who are visually impaired. In the United States alone, Prevent Blindness America advises there are 142,648,393 who can’t see as they should.

The National Eye Institute says the most common vision problems are nearsightedness and farsightedness, astigmatism and presbyopia, an age-related condition where people have more difficulty focusing.

Given those numbers, what makes any presenter comfortable using small fonts and white type on light backgrounds?

If people aren’t responding to your Presentation, the number one reason is that they can’t see it. If your vision is excellent, ask a friend or colleague who has vision issues to sit six feet away from your computer screen and see if they can read any of the type on it. (That is an estimate of what it will look like if you are on the stage and have your PowerPoint Presentation on a projector.)

This is a reality of life that is increasingly of concern as the population ages. If you have 14 or even 18 point type across the bottom of the slide to deliver your punchline, you can expect only a few people will get it.

Give every slide the visibility test before you include it. Keep type fonts big, bold and simple.

#5. Appeal to audio as well as video: play music across your PowerPoint

Why limit the appeal of your PowerPoint to just the visual sense when you could add hearing? Here is an example PowerPoint with music that illustrates how much sound can enhance even the simplest of messages:

How to Embed Fonts in PowerPoint on Windows and macOS

Tushar SethiOctober 25, 2021October 25, 2021
“Crises and deadlocks, when they occur, have at least this advantage, that they force us to think.”  - Jawaharlal Nehru...
PowerPoint Tips

Ashish AroraAugust 30, 2021August 30, 2021
The Covid-19 has caused unprecedented disruption in all industries and impacted people from all walks of life. The crisis forced... 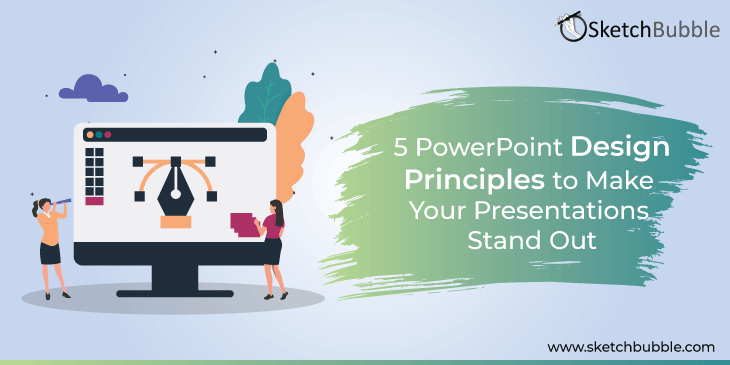 5 PowerPoint Design Principles to Make Your Presentations Stand Out