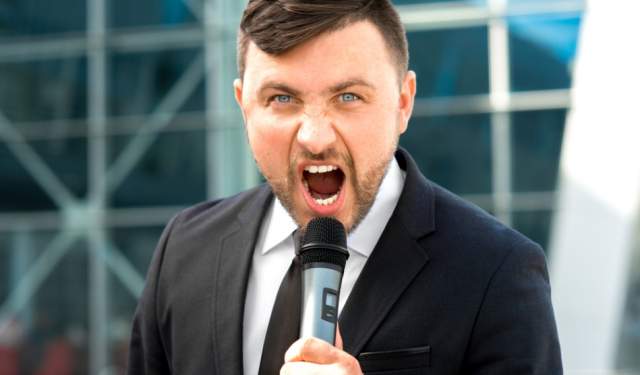 A speaker can have the most prepared, well thought out talk. But, if the presentation of the talk, falls flat, the message won’t get across. Here are some tips to make sure that your material is presented as well as it’s written.

Before you ever arrive at the venue, practice your talk. Practice the elements of stress, pitch, and speed.

Varying the pitch in one’s voice can convey meaning as well. For example, say the following sentence using a high-pitched voice (as you would talk to a baby, or a pet), your normal pitch, and a low pitch.

So many effects can be achieved by varying the speed of your words. Say “thirty million rupi” very fast, as if that were a trivial sum of money.

Then say, “Thirrrrttttyyyy millllionnnn ruuuuuppppiiiiis” extending every syllable to the maximum. Now it really seems like a lot of money. By increasing the time you took to say it, it’s almost as if you’ve increased the amount itself. Yet the actual words you’ve spoken are just the same.

Now that you’ve practiced your talk and how you want to inflect your words, here are some additional tips for what to do right before you present.

The Cure for Stage Fright

Many speakers experience stage fright right before or right as they are getting on stage. Here are some steps to take to cure it.

Step One: Remind yourself that you prepared as well as you can. Tell yourself that the hard part is over. Now you can just trust your preparation to do the work for you. No more effort or worry is required. Everything you need is already here for you.

Step Four: Just as your talk is about to begin, think about one aspect of your performance that is your top priority. What is the single thing that you most need to remember? Don’t think about this while you’re talking. Think about it beforehand. You may, for instance, want to emphasize  good posture. So you remind yourself to stand up straight. Or you can recall the importance of speaking clearly and varying the cadence of your sentences. Although there may be dozens of elements you would like to emphasize, choosing more than one will only diminish the benefits of this exercise. So choose one aspect, and choose it carefully.

Step Five: Have fun! You’re giving a talk! Let your passion and enthusiasm come through. Let the thoughts and emotions of your speech take over. Don’t allow minor details to obscure your feelings. Let your excitement for the opportunity be present.

What to Do After Your Opening

Essential Elements of Any Speech

First, you need to clearly communicate the information or message of your talk. You need to get your facts and figures across. You need to have a theme or a thesis, and it has to be presented clearly and convincingly. Basically, doing this is why you are standing up there in the first place – yet in terms of the impact you will make, this is actually the least important part of your speech.

Element number two is stories or anecdotes about people other than yourself. If all you’re doing is giving the audience  information, you’re not fulfilling one of your listeners’ basic needs and you’re not doing your job as a speaker. Although most stories are perceived as entertainment, they can also serve as a trigger for your audience to think and reflect. In fact, this is exactly what they should do. The success of your speech lies in the inner changes you bring about in your audience.

When it comes to choosing your words, two rules are absolutely essential. The first is economy. That means using the fewest number of words in order to say what you want to say.

You should not only use the fewest possible words, but also use  the simplest possible words. Overestimating the vocabulary of your audience is a big mistake, because you risk losing their attention immediately.

Whenever you have an opportunity, use props of one kind or another. Hold something up for the audience to see. Play a brief recording or project an image onto a screen.

Watch your “ums” and “uhs.” Most people don’t realize how often these wasted syllables intrude on their oral communication – especially when they’re speaking in front of an audience. Basically, um and uh are expressions of nervousness. They’re unconscious ways of buying time because you’re not absolutely certain of what you’re going to say next. So the more prepared you are, the less nervous you’ll be, and the less you’ll need to stall.

The Structure of Your Talk

How many times have you heard a talk and you had no idea where it was going. The speaker just tended to wander around aimlessly, telling stories that didn’t seem to relate to the topic at hand. You really weren’t sure what the speaker was saying or why. Just when you thought it would never end, it did. But the abrupt ending left you wondering, “What was the purpose of that?

Here are the three keys to structuring your presentation so that your audience will stay engaged and understand “Why am I listening to this?”

First, you the speaker must share a vivid, personal experience that’s relevant to the action you ultimately want your listeners to take.

Second, call directly upon your audience to take that single, well-defined action.

Third, clearly and convincingly describe the benefit that listeners will gain by taking the action you desire.

So, if you’re giving a talk and want people to volunteer to feed the homeless, share it this way. First, tell a personal experience you had with a hungry, homeless person and how it caused you to volunteer. Then, directly ask them to volunteer. Third, tell the listener what they will get from volunteering.

Now that you’ve come to the end of your talk, it’s time to think about an effective close. Here are some tips and techniques for what to do, and NOT do in closing.

What NOT To Do In Closing

What TO Do In Closing

Your conclusion really starts when you signal that you’re going to summarize what you’ve said so far. This is usually done with a phrase like, “To sum up, here are the key points to remember…” Make this summary as concise as possible. The audience wants to make sure they know what you’ve said, but they also want to reach the destination point in a reasonable period of time.

Following the summary, many speakers like to move away from a procedural tone in order to appeal to the nobler motives of the audience. This is a good place for a quotation, a stanza from a poem, or a reference to an admirable and inspirational individual. In the interests of time, it’s best to invoke someone whose name is already known to the audience. With this reference in place, you can link that individual to the task at hand. Phrases like, “In the best interests of our company…” or “For the sake of our nation and the world…” are appropriate at this point.

At this point you should throw down a challenge to the audience. This should be a final call to action based on the argument you’ve made in your talk. It should also include a reason to act. The call to action should be clear and specific. Your audience should be left with no doubt about what it is you’re asking.  The goal is to put the ball in the listeners’ court in a convincing and emphatic way. If you can be poetic as well, so much the better.

At the same time you’re making this appeal, you have a great opportunity to reinforce it with an audio or visual component. The first choice would probably be a slide projection of something connected to the presentation. It could be an image showing the completed project, or a group picture of your team, or the text of a quote from someone that would appeal to the audience. Another alternative is to have a symbol of some sort – a lapel pin, for example – that could be distributed to the listeners at this point. This can be distracting, but it’s also an excellent takeaway that will remind people of what they’ve heard.

Finally, repeat the most important benefit in the fewest possible words. “We will see our goals realized.” “Your income will sharply increase.” “You will fulfill your true potential.” Try to do this on a personal as well as an inspirational level. When you’ve done that, the conclusion of your presentation is finished.

At the end of many talks, there’s time for a question and answer session. Here are some suggestions for handling that last few minutes.

9 points for your Q&A Session

Well, there you have it. These tips and techniques will help you plan and execute an impactful talk. Content is key, but the presentation is the doorway to success.

“There are always three speeches for every one you actually gave. The one you practiced, the one you gave, and the one you wish you gave.” Dale Carnegie