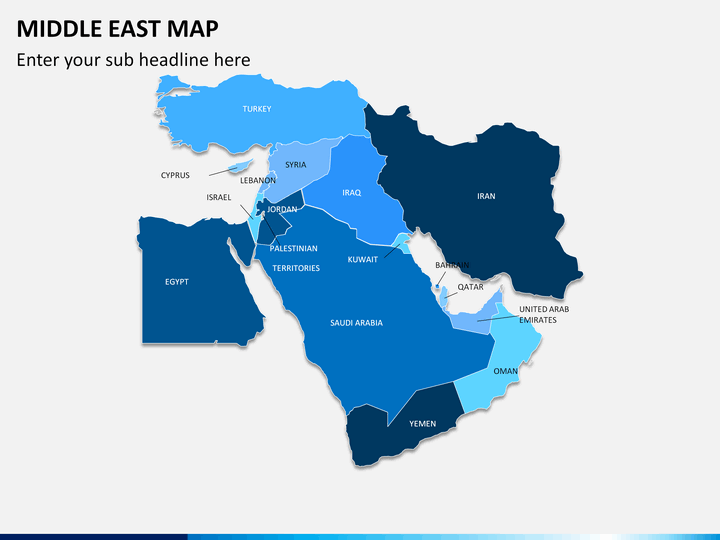 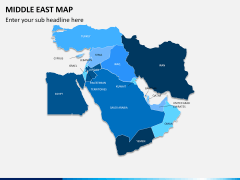 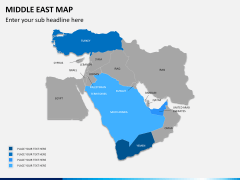 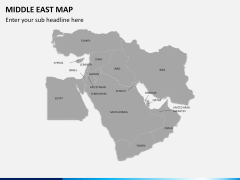 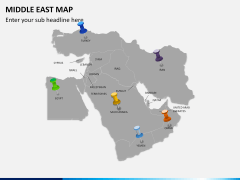 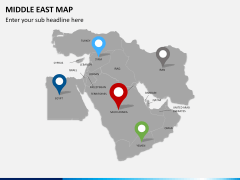 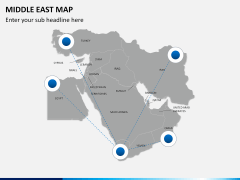 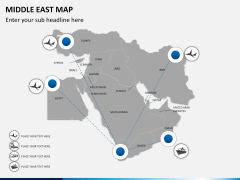 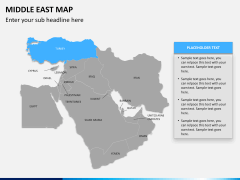 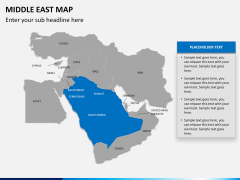 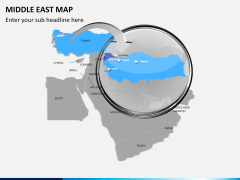 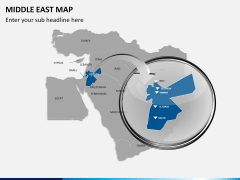 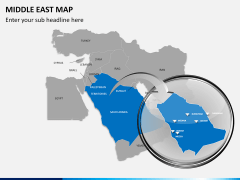 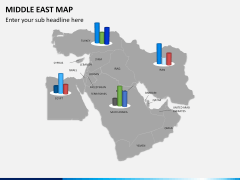 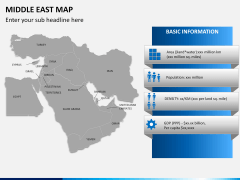 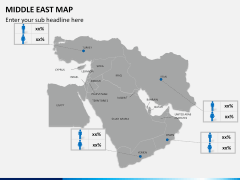 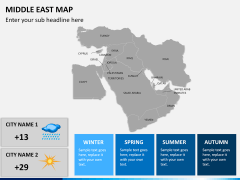 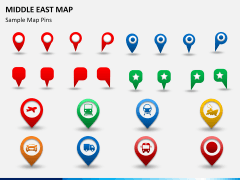 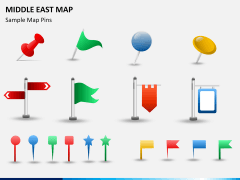 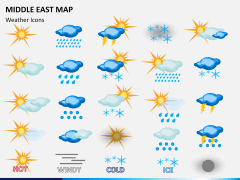 Many a times, your presentation may require you to include Middle East map. You may be illustrating the region according to its historical significance, various locations and demographics. You may be in the need of demonstrating the various government policies and economic standings of the countries in the region. Honestly, creating maps in PowerPoint is such an ache! But pre-designed visual aids with complete customization option will surely make the task easier.

You will never have to worry even if you have to include most complicated things within. Starting from physical features such as the mountains, rivers or longitudinal and latitudinal descriptions to political events, comparative study of the countries, it won't take a lot of time. Your task will be just adding or removing certain elements. Whether you've to highlight the major tourist spots or single out important cities, you need not worry at all. You can place flags or pinpoints, and shade out specific areas. Changing the background, basic layout or the graphic will be a child's play.

When you have special template with completely editable slides that are compatible with every version of the PowerPoint and offer versatile features, you will obviously be spectacular. Give up wondering how you are going to create the visuals and just concentrate on the content. The convenience of adding and removing your content in the text placeholder will let you place exact content at exact place. You will not just save your time but will also be saved from making unnecessary efforts. Whereas creating a slide from the scratch takes away several hours, editing and customizing takes no more than a couple of minutes.

You will be building most professional visuals with most exquisite designing. Your message will be conveyed in a way like it never did before. So weave magic threads around your audience to bind them towards your talk with nothing more than slight touch up!

Geographically, the Middle East is the region on the earth's surface that covers the arid part of Southwest Asia and a part of North Africa by including Egypt and it slightly touches the European landmass by including Turkey. It is on the east of Mediterranean Sea and stretches up to the Persian Gulf and on its north it has the Black and Caspian Seas, then going to the south, it has the Indian Ocean and Sahara Desert.

A culturally rich and historically important part, it has a unique political significance and sensitivity. All three major monotheistic religions of Christianity, Judaism, and Islam originate from here along with various other faiths. The countries that fall in the region are - Bahrain, Cyprus, Egypt, Iran, Iraq, Israel, Jordan, Kuwait, Lebanon, Oman, Qatar, Saudi Arabia, Syria, Turkey, United Arab Emirates, and Yemen.