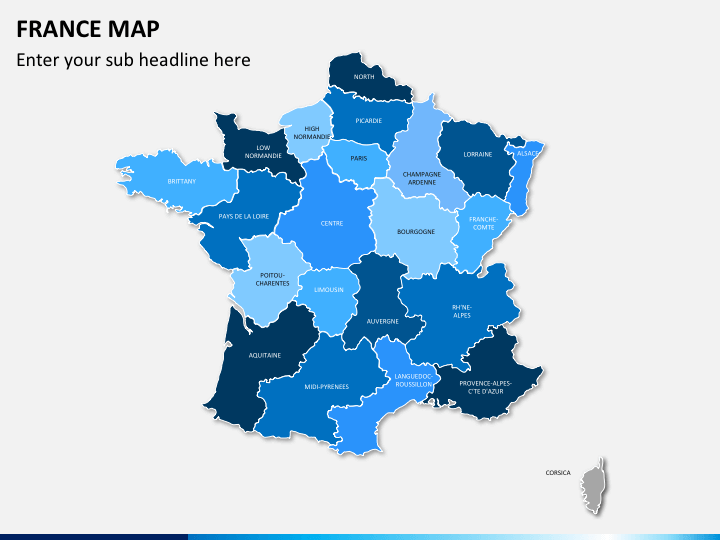 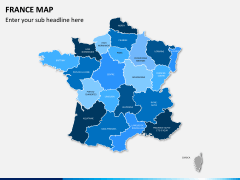 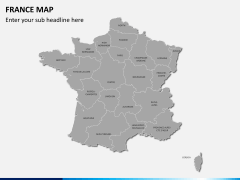 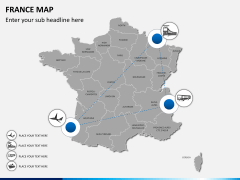 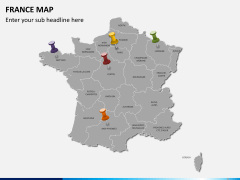 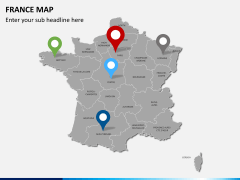 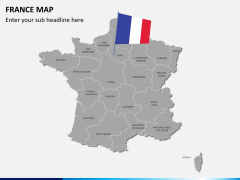 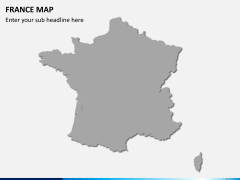 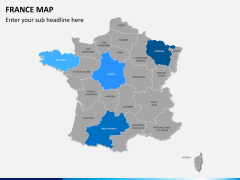 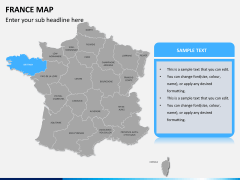 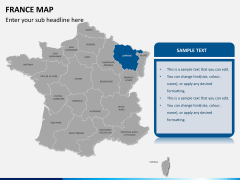 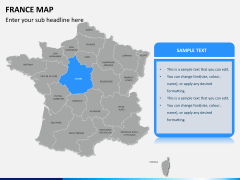 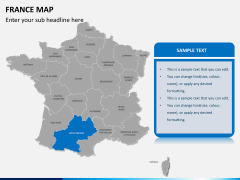 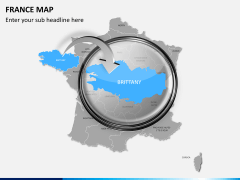 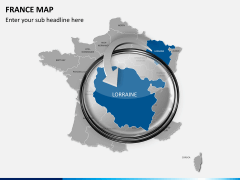 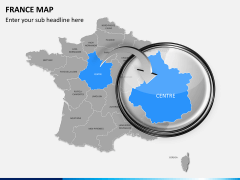 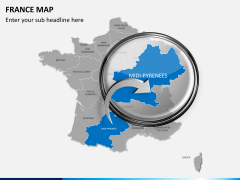 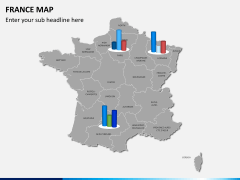 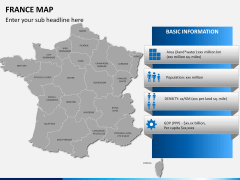 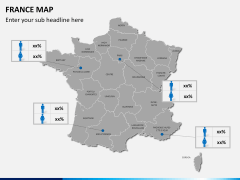 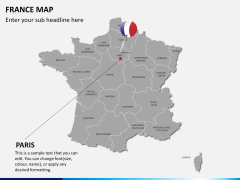 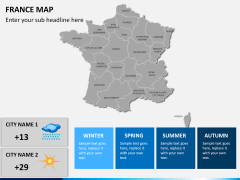 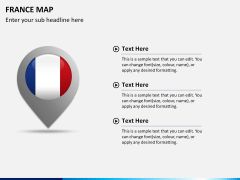 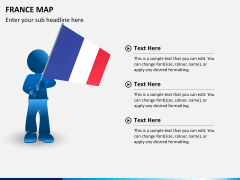 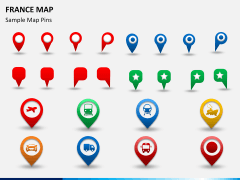 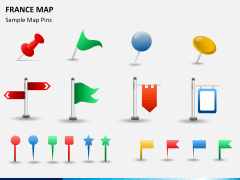 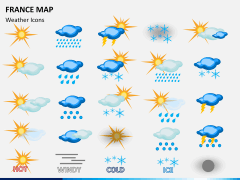 From business perspective to educational viewpoint, presentations often need you to include maps in them. Thus, we bring to you a professionally built pre-designed PowerPoint France Map Template. This will help you create most effective visual aids. Easy to maneuver and quick to have them included, the slides make your task simpler and message visually stronger.

The information that you aim at conveying may need you to include several distinctive geographical facts. Describing them through proper illustration becomes necessary. This not only clarifies your points but also makes your efforts more attractive. So, with our template, you can paint your thoughts, concepts, and information into attention grabbing picturesque images.

The set offers you maps of the entire country with major areas highlighted, marked out with different colors, or simply zoomed out. Then there you have important regions and cities illustrated separately. You can add more symbols, shapes, and elements for your convenience. From adding flags or pinpoints on the slides to reshaping and resizing the background, you can manage them just the way you want. Now, if your aim is to display the travel routes, you can simply place symbols for milestones, railway, or flight and so on. Similarly, when you want to explain how much net profit one of your manufacturing plants offers and how much the other ones do; you can place percentage across the map.

Quick and easy to edit as you get complete customization option, you save all your time and hard-work. Its versatility further adds to the list of benefits that you get by using it. So, whether you're to explain the popular tourist spots or display the market share of your product across Paris, Nice, or Strasbourg, you can depend on the set. With simple editing, content addition and a bit of touch up, you're all set to impress your audiences.

France or the French Republic is the largest sovereign country in Western Europe as well as in the EU and third-largest in the entire Europe by its area. It is also the second most populated country of the EU with an approximate population of 67 million. Again, it is one of the only three countries that have coastlines on Atlantic and Mediterranean Sea; Morocco and Spain are the other two. It is divided in 27 regions out of which 22 are in metropolitan France and 5 of them are overseas regions that include Guadeloupe, Martinique, Guyana, Reunion and Mayotte.

It has a great significance around the globe with its political, economic, cultural and military influences. Being a developed country, the citizens get a really high standard of living. It is the world's fifth largest economy by nominal GDP and seventh largest by purchasing power parity and has international ranking for numerous other fields like health care, human development, life expectancy, education and civil liberties. It is indeed the wealthiest nation of Europe with regard to total household wealth.

With its rich history and culture and contributions in art, literature, philosophy, science, fashion, and military, it enjoys a prominent place globally. Being a founding member of the United Nations and one of the five permanent members of the UN Security Council and several other international institutions, it has a strong hold in world's political scenario. It is also a popular tourist destination with around 83 million foreign tourists hitting the French land every year.